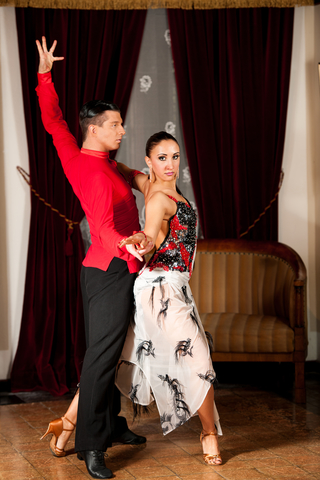 When it comes to latin dance, there are seemingly endless styles and variations. Whether you are a dancer yourself or just a casual fan, you can achieve a higher level of appreciation by getting to know the fundamentals and history of each style. In the sections below, Elite will outline some of the key differences between salsa, bachata, cha-cha and rumba– four extremely popular latin styles of ballroom dance. Keep reading for more!

Possibly the most well-known latin dance, salsa’s quick-quick-slow pattern and intricate music have popularized it since the 1970s. Since the original dance itself is thought to originate in 1900s Puerto Rico or Cuba, countless footwork and style variations have evolved over time. Fast pace and quick combinations define the excitement of this 4/4-timed dance.

If you are somewhat familiar with latin dance, you may know the names bolero and merengue– these are the ancestors of bachata, which originated in the Dominican Republic. Traditionalists may have frowned on this form of dance once, but now it is as popular as any ballroom style. Danced in 4/4 time, bachata consists of three steps and a tap embellished with hip motion or even a close embrace.

Whether you realize it or not, you might know the basics of the cha-cha… “one-two-cha-cha-cha” is a common refrain that actually explains the steps of the dance. Though ballroom cha-cha is so fast and intricate, it may be difficult for the untrained eye to see that dancers are still moving in 4/4 time. Invented in 1950s Cuba, cha-cha is favored by ballroom dancers who opt for versatility and playfulness.

While the above styles are known for fast, staccato movement– the rumba sets itself apart by being one of the only low-speed latin dances. Different patterns are popular in different regions, but the slow seriousness of the style remains universal. The best rumba routines highlight expression, body language and the tension between the dancers.

As you can see– while similar, each style of latin dance has one or two features that make them stand out. These differences become even more apparent when performed by athletes who understand their origin. Curious? Interested in learning more? Contact or visit Elite Dance Studio for your first lesson today!